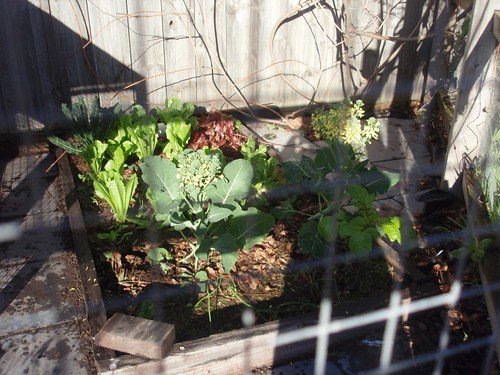 My broccolini has bolted. In true Skinflint Sunday style, I pulled up two of them today and fed them to both sets of chooks. Waste not, want not!

Friday, midnight. Evan17 walks into my room with my mobile, saying, “Here she is”, before handing it over. I was totally asleep until that moment, and as I reached for the phone I’m going through the list of boys in my head, remembering who was home and who was out that night.
It was one of Tom22’s friends.
“Tom22 has tripped and hurt himself quite badly at Ormond station. Are you able to come and get him?”
I threw my duck down coat over my pyjamas, popped my ipad in my bag in case we’d have to wait in a hospital ER and raced down. There was Tom22 with head injuries, covered in blood.
It was a freezing cold night in Melbourne that night and he and some mates had gone down to Chapel st. On the way home, he was walking up the steps at the station, hands in the pockets of his jacket, when he tripped on a step. He couldn’t put out his hands to save himself, so he landed on the corner of the steps, face first. He had a massive gash on his forehead, the bridge of his nose had no skin left on it and there was a jagged wound less than a centimetre directly under his left eye. Clearly, he was lucky not to have lost his eye.
I bundled him in the car, feeling grateful that I’d accepted the offer of a loan car from the mechanic (my car isn’t well) and off we went to Monash Medical Centre. We got there just before 12.30AM.
At 5AM we were seen by a doctor. She said she’d sew up the cuts and all will be well. Now, call me crazy, but I’m thinking that facial cuts on my son aren’t really the sort of practise I want a medical student to be having. I ask for a plastic surgeon, all the while thanking the gods of all things financial that we have Medicare in this country.
Apparently they don’t do plastic surgery at Monash any more. We have to go to Dandenong hospital. But we have to wait another 3.5 hours before we can be released from Monash. Argh!
We schlep over to Dandenong. Tom22’s face hasn’t been touched in all that time. He’s still bleeding but it’s slowed down. He watches tv. I have books on my ipad so I start “The Millionaire Next Door.” By the time the battery fails, I’ve read 70% of the book. We were waiting a long time. By that time Tom22 was in theatre.
So glad I asked for the plastics people. The cut on his forehead is covered by bandages, but the cut under his eye has the most delicate stitching you can imagine. He’ll be scarred, but I’m hoping over time it won’t be noticeable.
We leave the hospital just before 5PM. Just a short spin down Centre Rd to get home.
We have a car accident.
No, I’m not kidding.
A P-plater backed into the car and punctured the back tyre. We weren’t going anywhere. And it wasn’t even my car!!!
Remember how I said it was a cold day? Remember how I said I was still in my pyjamas? We had to stand on the corner of Warrigal and Centre roads for 90 minutes in the icy fresh-from-Antartica wind, waiting for the RACV to come and change the tyre. By that stage, Tom22 hadn’t eaten for 25 hours. He stayed in the car and drifted in and out of sleep. The P plater was distressed and verging on being hysterical, so I calmed her down and then we waited…. Her Mum came and we worked out all the details.
Tom22 and I ended up getting home just before 7PM, after going to the machanic’s and letting him know what had happened.
We were greeted by Evan17 telling us that the toaster had died. I was so happy. The bad luck streak had ended. That was the third thing!

On Saturday afternoon I grabbed Ryan19 and we went to Harvey Norman’s to buy a $30 toaster. We came back with one. Also a jaffle maker, a dog kennel, a dog collar for Poppy and a new mattress for me. Only the jaffle maker was purchased at Harvey Norman. We just kept driving past shops that made me think of things we needed. 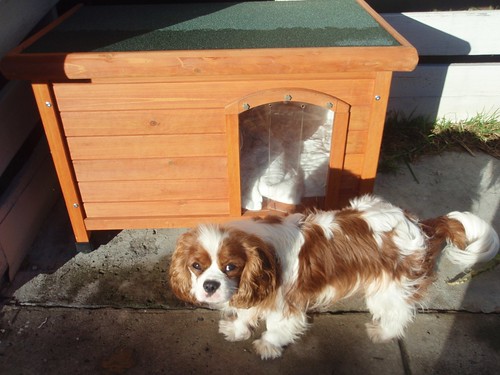 The old kennel we had is less than waterproof, as I discovered the other day. This new kennel allows the puppers to sleep around the corner from the door and be out of any wind. They love it, though I’m hoping Poppy and Jeff don’t chew the clear door. It was 20% off, so I saved a few shekels. I primarily wanted this for Bertie. He’s getting old and I know this will make a difference to his quality of life.

The thing I’m REALLY excited about is the mattress. I’ve had my current mattress for 19 years. I’m waking up with a bad back some mornings and I’m sure it’s because the mattress is old and needs replacing. Get this!!!!
Queen sized mattress…. floor stock. Has a stain where the glue has come through. (Who cares? No one will ever see it anyway.)
$4,000 reduced to $1,000.
On Wednesday night I’ll be sleeping like a baby.
🙂

A horrible day followed by a brilliant day. Isn’t life wonderful?
How clever is this chook feeder made from recycled materials?

Bacon-Barley risotto Bit of a change from using rice.

Mini Italian Lamb Meatballs. I have some roast lamb left over, so I might make these tonight.

Pizza Wheels These look FABULOUS for lunchboxes. The boys won’t know what hit them!

8 thoughts on “Skinflint Sunday: A Tale of Two Days.”