After London I hopped into a taxi and went to Fenchurch St Station to go and visit Deana. She’s been reading this blog for years and has very kindly offered to put me up for a few days. This is the view from her back window as I’m sitting here typing. Yesterday was a very restful day. I was picked up at the station by Dave, Deana’s husband. Over lunch at the pub I found out that he was a cockney (born under the sound of the Bow bells.) Tick another one off the list. 🙂 Dave found it funny that I had to come to Essex to find a cockney after being in London all week.

I also saw my first bumblebee in Dean’s garden while we were sitting out there sipping Pimms and Lemonade. She puts mint and strawberries in hers, Scott, so it was much nicer than the one in the pub. We went for a drive to a little parish church down a winding lane. It was so peaceful, with a couple of white doves cooing and we walked around the old gravestones and I snapped shots of bumblebees in the lavender.

The old church had a little graveyard beside it:

There were even some wooden markers, which I’ve never seen before.

After dinner we made the timtam fudge in Deana’s thermomix. She has enough timtams to make 4 more batches.

The following day we went to Hever Castle, the childhood home of Mary and Anne Boleyn. This is me at the gatehouse, being wildly excited.

Look at how beautiful it is.

In the early 1900s Lord Astor, from America, found it nearly derelict. He bought it and restored it. Much of it is from that era, but enough remains that you can really get a feel for what was the Boleyn family home and you can see Henry VIII striding through, all his retinue behind him. The restoration is impeccable, but the gardens are amazing. 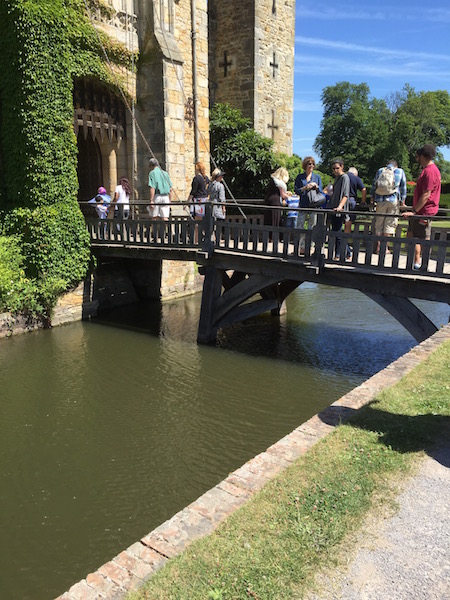 You enter the castle via a drawbridge over a moat. A moat!!!!

It’s a very well-mannered moat, with the second-biggest fish I’ve ever seen in it.

This is the view outside once you’re in the inner courtyard, which is the most delectable-looking place. Look at the stairs… imagine who’s walked through them. (Winston Churchill was a frequent visitor in the 30’s and 40’s… he and the Lord Astor of the time used to paint together. It wasn’t just Tudor celebrities.)

A portion of the inner courtyard. Can you imagine people flinging open the windows and calling down to visitors below? 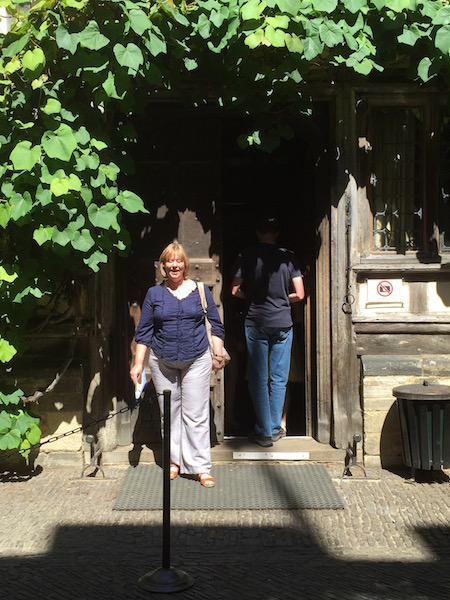 This is Deana about to enter.

No photos were allowed once we went inside, so I’ll just say that Deana and I had a wonderful time. The dining room with its minstrel gallery was far smaller than you’d think. I don’t know how they ever fitted everyone in there when the King came to visit. Anne’s bedroom was tiny; clearly girls weren’t important back then. The King’s room was huge by comparison. It was an amazing experience to be able to stand there and imagine…

Scott, you’ll be astounded to hear that the audio guide worked perfectly for me, just as it did in Westminster. (He had to keep rescuing me when the audio guides didn’t work for me at the Bristish Museum, the Tower and  at Hampton Court.)

We were in the house for 3 hours. Once we cme out we found a nice shady spot beside the lake to have our picnic lunch; then we went for a wander around. 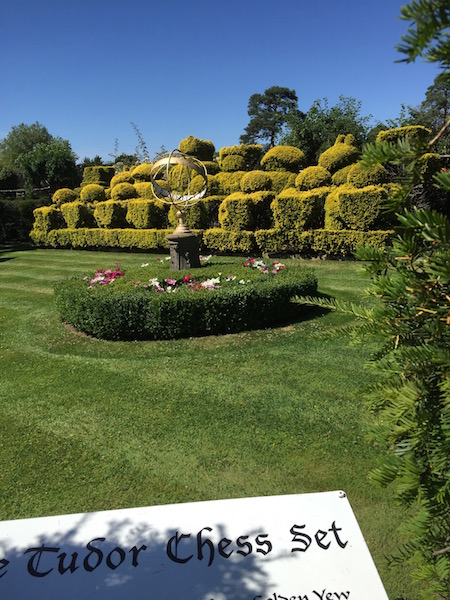 Every garden needs a topiary chess set. Bit hard to move the pieces to play a game, though.

Part of the rose garden.

A bit more of the rose garden.

This one’s for you, Bek. They’ve done almost the same thing as you’ve done with your ‘stop-over’ apples. 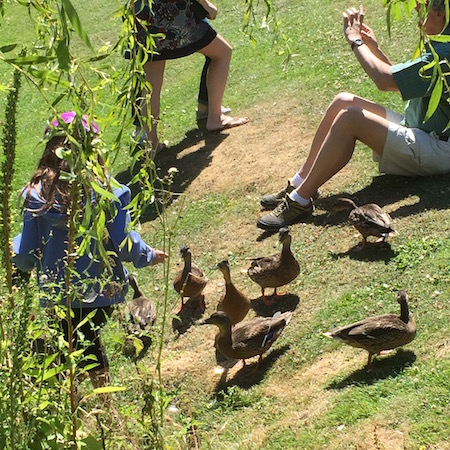 Many ducks and swans.

When we got home after experiencing my first traffic jam on an English motorway this was waiting for us. Dave got it for us as a joke. We had English fish and chips, which was really good, and then we fell into bed.

5 thoughts on “A blogmeet and Hever Castle.”