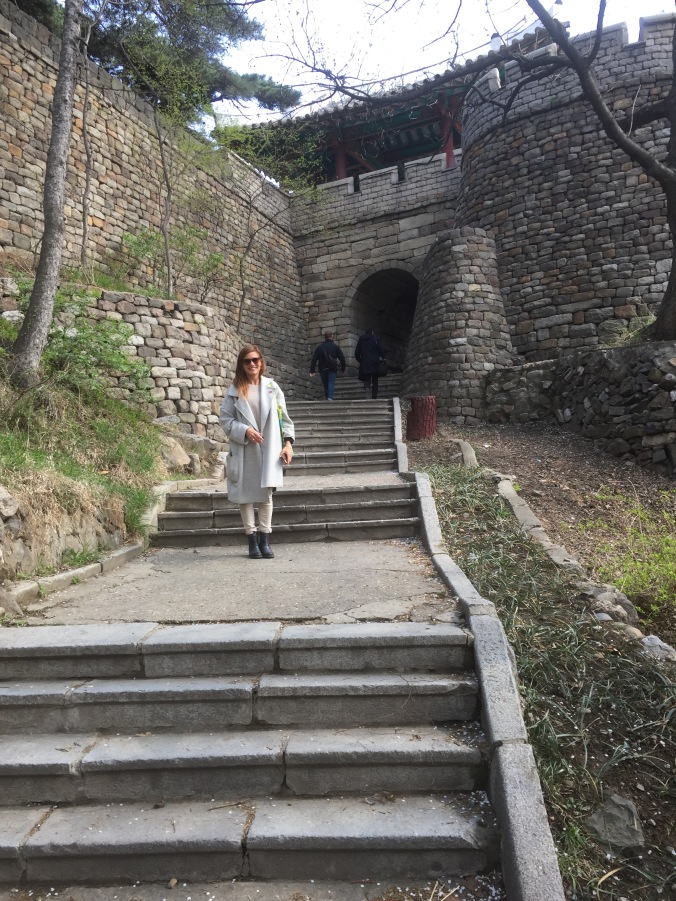 After walking a little way up the street after lunch we came to the park entrance. There were very few people around on our walk over, which was a little surprising considering that it was The Big Day and that we’d seen so many people practising the massed dancing all week.

But once we got into the park and headed down a path it all changed. Our guides were walking purposefully down the path and I was bringing up the rear, listening to the sound of music playing from a boombox nearby.

There was a group of people near the path, dancing to some music. They’d finished a picnic lunch and now they were enjoying the day. I stopped to take a photo and a stocky man saw me and gestured for me to come join them. 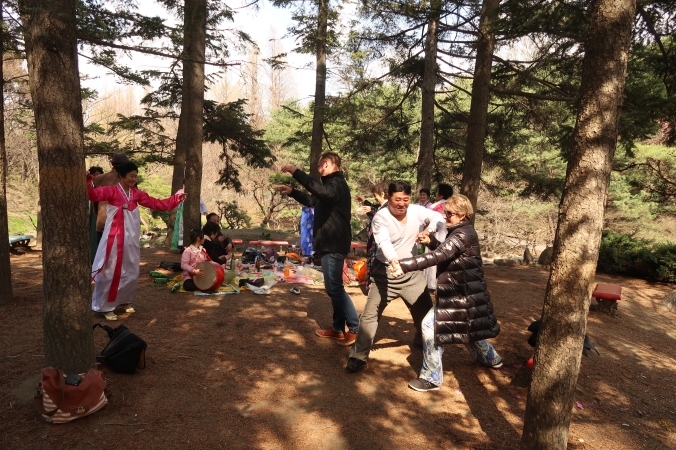 How could I say no? I raced over and he grabbed my hands and we started dancing. Luckily, someone from our group saw me break off and soon the others were with me. Some of us joined in with the dancing, while others stood around taking photos and drinking and talking with the locals.

Niall seized the opportunity to get into his dress again. Here, one of the ladies is helping him with the tricky bow at the front. Then, once he appeared like this, the party really got started!

It didn’t take long before we gathered quite the crowd around us. 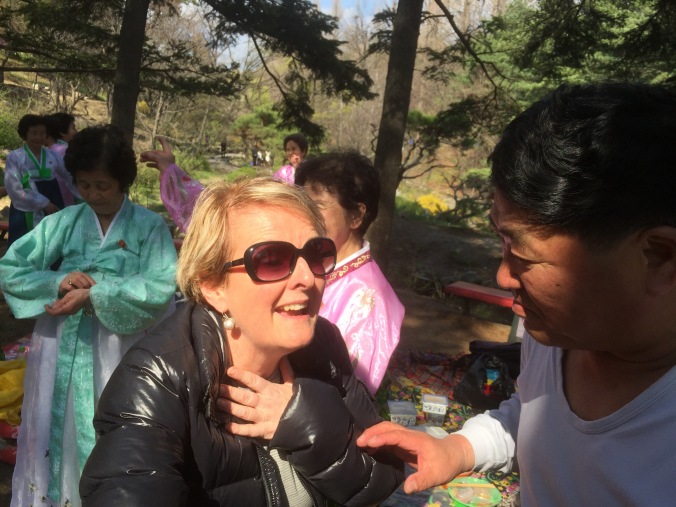 I think this was when a sip of soju went down the wrong way.

Niall was in his element. He was dancing with both the men and the women. We were all either dancing or sharing drinks with some of the locals. Helen gave a little girl a bubble-blower and the little girl was entranced. Just before we left the song Come to Mount Paektu came onto the boom box so we all stood in a circle and sang it together.

The locals were rapt that we knew the words. (Well… I knew the chorus – it’s very rousing. I’m still a little shaky on the verses.) 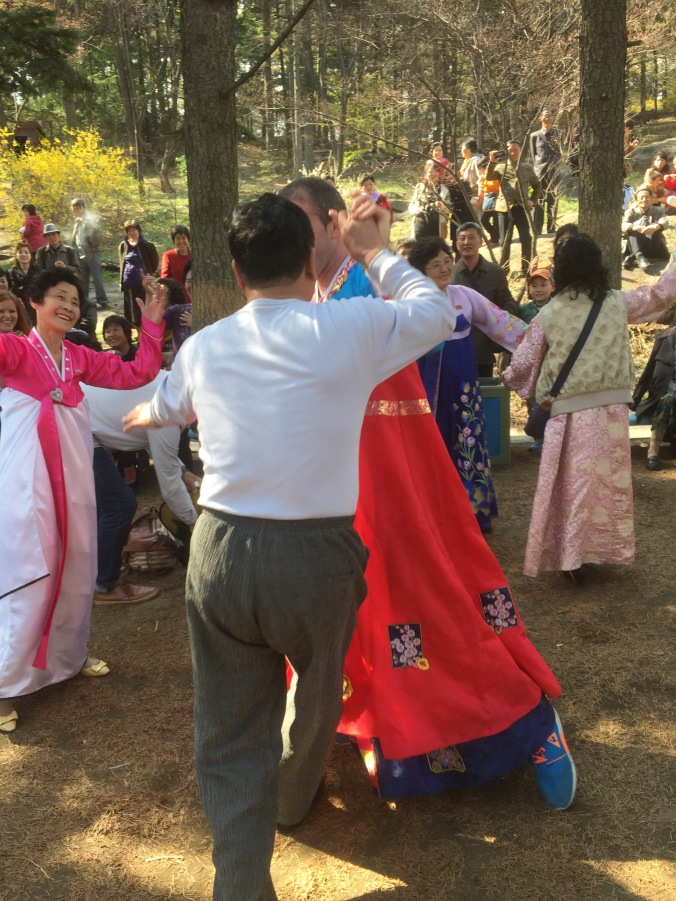 We were there for at least 20 minutes having a great time when our guides said that we’d better keep moving. We waved goodbye and set off. I made sure to stay next to Niall because I wanted to see the reactions of the ordinary people when they saw him. The dress was a huge hit at the DMZ, but this the middle of Pyongyang, where people are more sheltered and (presumably) conservative. 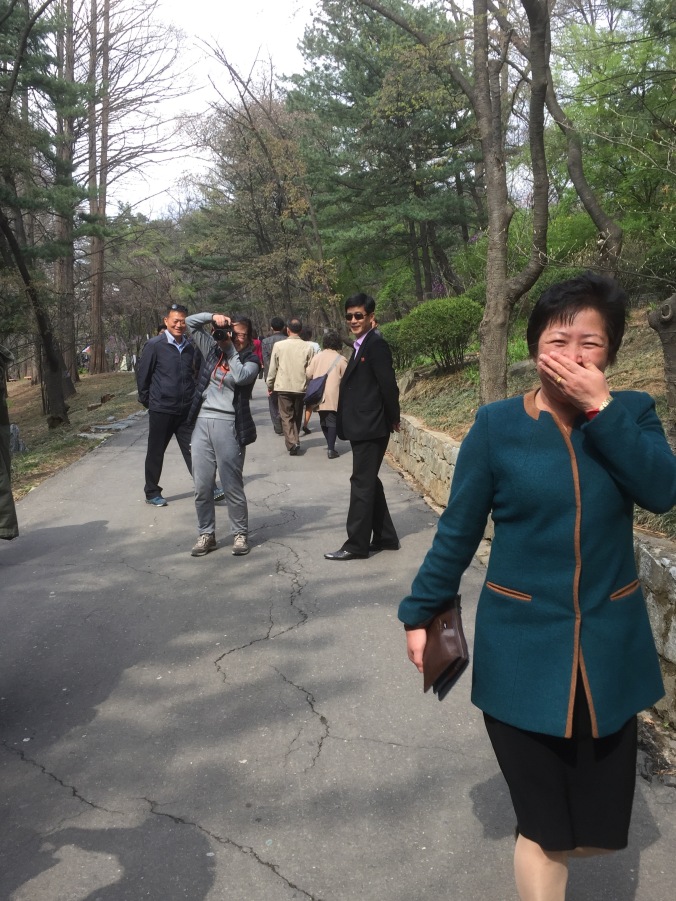 Men in drag is DEFINITELY not a thing in this country. Niall walking along in his dress, as happy as can be, is not a sight that anyone here is expecting.

It was like being part of a rock star’s entourage. These girls were desperate to have a group photo with him.

8 phones were handed across to Matt and they all got their wish.

The universal sign of the “thumbs up”. It helped that Niall is so genuinely a smiley, happy person who doesn’t take himself too seriously. It was easy for the North Koreans to read his face.

Some people were a little more gobsmacked than most… 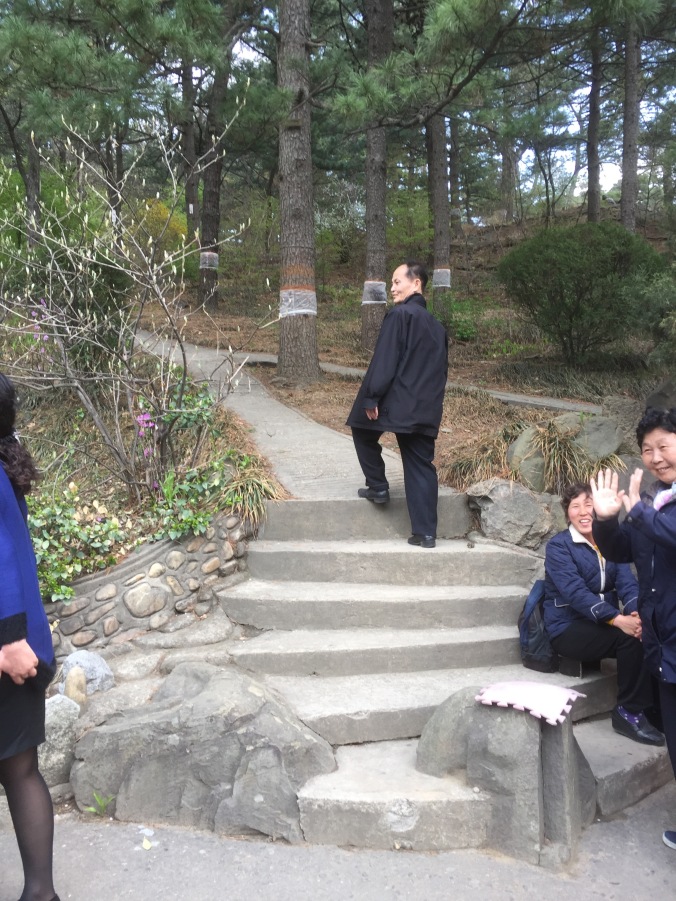 … and this gentleman didn’t appear to approve very much at all.

We reached a small square in the middle of the park. Music was playing through loudspeakers and a couple of hundred people were dancing. I think this is where the guides were headed to before I derailed them by dancing with my Duracell man.

There were lots of people standing around on the paved edges and watching. A man with a megaphone was standing on the grass and he’d tell off anyone who stepped on it. We walked up to the people on the path and we were welcomed with open arms – especially Niall. 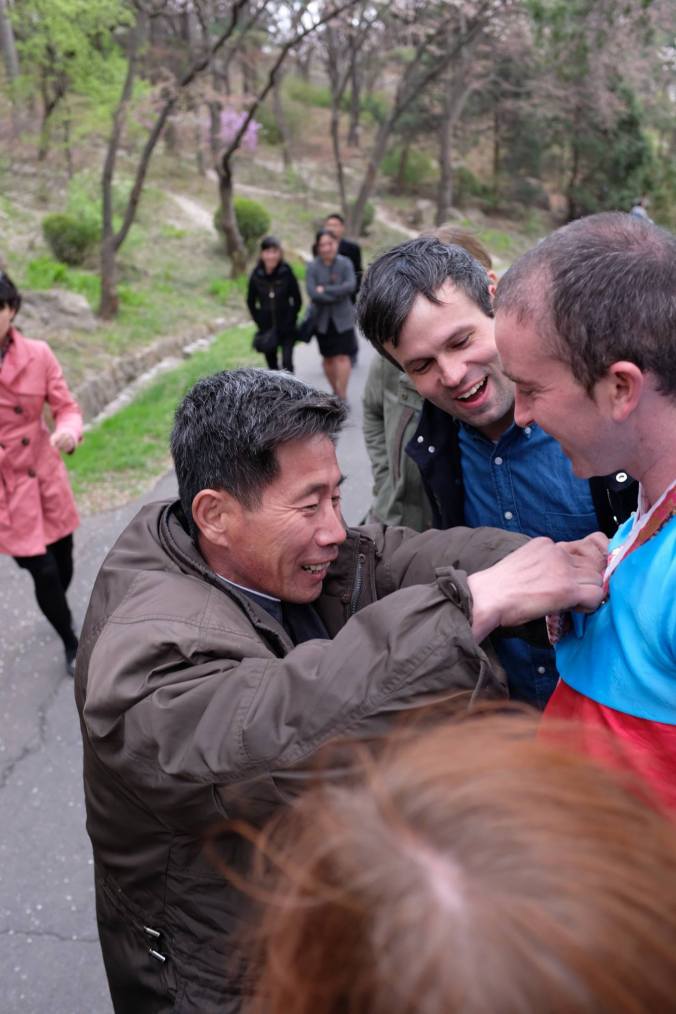 A quick modesty adjustment of his gown and then he plunged into the crowd and was whisked away to dance. Maria, Marjo, Helen and I raced after him. Well, why wouldn’t you? 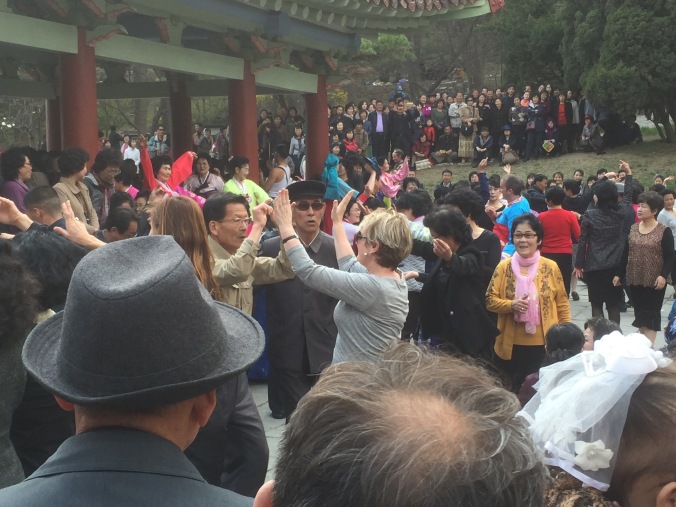 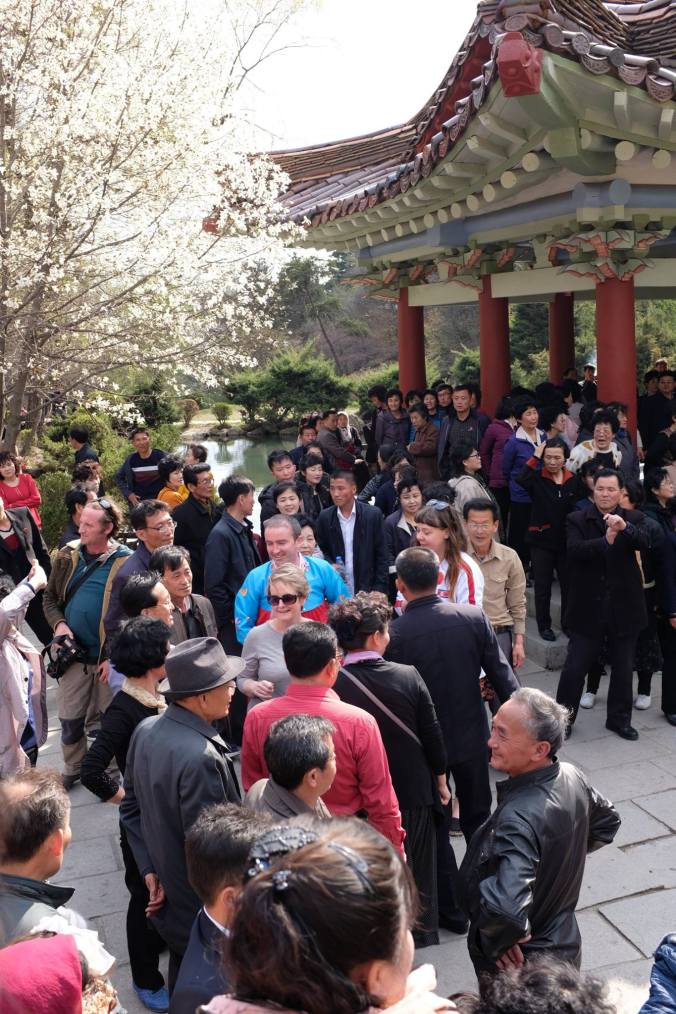 A quick spot of refreshment, then our guides were hurrying us along. We took the path out of the park, after a brief stop at seriously the most ammoniacal toilets I’ve ever had the misfortune to encounter. ‘Pungent’ doesn’t even begin to describe them.

On the way, we walked past this lady and her friends. She was groovin’ and shakin’ with music coming out from her microphone. Very high tech. We wanted to spend a little time dancing with her but Matt and Mr Kim were waving us along. 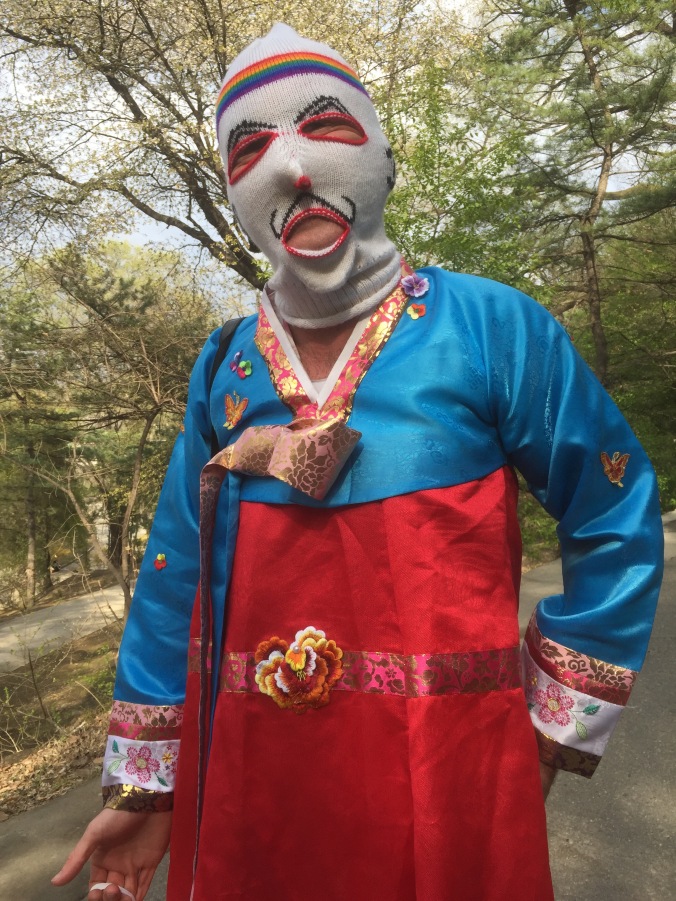 On the way down the hill to the bus I heard, “Oh God no, Niall!” coming from behind me. I turned around and it was Niall in a ski mask. We all screamed and told him to take it off quickly. He didn’t realise how scary he looked until I took this photo and showed him. Thank God he didn’t put it on in the park – we would’ve had a riot on our hands!

Meanwhile our guides were calling for us to hurry, that we didn’t want to miss out. I didn’t see how anything could be better than what we were just doing, but we picked up the pace and scampered for the bus.

Our wonderful day was going to turn even better.

Fortunate Frogdancer was having the time of her life.